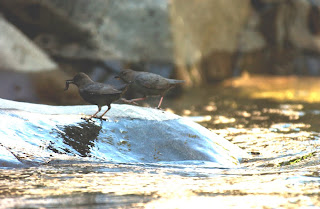 THE waterfalls of the Sierra are frequented by only one bird, --the Ouzel or Water Thrush ( Cinclus Mexicanus , Sw.). He is a singularly joyous and lovable little fellow, about the size of a robin, clad in a plain waterproof suit of bluish gray, with a tinge of chocolate on the head and shoulders. In form he is about as smoothly plump and compact as a pebble that has been whirled in a pot-hole, the flowing contour of his body being interrupted only by his strong feet and bill, the crisp wing-tips, and the up-slanted wren-like tail.
-John Muir

Quite a few years ago while spending a weekend camping and hiking on the North of the Middle Fork of the American River, I came across a high piercing sound coming from the shady south side of the river on a craggy rock ledge overhanging the rushing river. I had an old Nikon FM2 camera with a small telephoto lens and began searching the outcropping of serpentine green ferns, poison oak and moss for the source of the noise. Soon I spotted a bird’s nest wedged tightly into the rocks about 20 feet over the water. I thought I could see two baby birds in the nest but it was so dark and my lens was not the best so I was not sure. When a parent Water Ouzel alias Thrasher ( Cinclus Mexicanus , Sw.) or sometimes called a Dipper because of the up and down movement it makes when standing, flew into the frame the yellow mouths of it’s chicks opened up and began to beg for food. I watched two different adult Dippers come and go from up and down the river bringing food to this nest for a few minutes and decided that I would like a shot of this action. Soon a pattern developed for just about every time that the one of the parents would return instead of going directly to the nest, they would stop at the rock ledge in the shade underneath the ledge where the nest was and take a moment to relax and ignore the begging chicks. It seemed as the parents both needed this little break, as I am sure they kept up the feeding all day long in the summer months that the chicks were in the nest. Only after they had taken this pit stop would the parents fly up into the nest for just an instant and drop off some food for the big mouth chicks. That was the moment when I would try to get a photo. So without a tripod or a wet suit, I laid and stood in the cold water for a couple hours and tried to get a good photo. I got a vast number of lousy shots before I managed to capture a ‘good’ one of one of the adults feeding the begging chicks.
This semester at Sacramento State University I am a senior in the Photography Department. I landed a part time job as a photography internship with the Department of Fish and Game, mainly on the merits of my image of the Dipper’s nest and with the thought that I would head back to the American River and capture more images of the bird and develop an article. In January, I headed back to that stretch of river seeking out a Dipper nest, but this time I have a better lens and a goal and felt confident that that nest would be there again. I went back to the same rock outcropping looking for the nesting Dippers and not only did not find a nest but I did not spot one Water Ouzel the whole day. The water Ouzel is a funny little bird and has developed a rare skill for survival along the rivers of California’s Sierra Nevada Mountains. The Water Ouzel spends it’s days landing on the bright sun bleached rocks mid river, bobbing up and down a few times, then walks strait into the icy blue rush where it hunts for food underwater. By mid February, I had made three unsuccessful trips to the same area and only saw one dipper at the end of the day on a rock mid river. I was beginning to feel like I was wasting my time when in mid April on my fifth journey in, I spotted two small birds building a nest on the same rocks as the old dipper nest. Unfortunately, these turned out to be Black Phoebes, which do not walk underwater and are one third as small as an Ouzel with a white belly. Ready to throw in the towel for the Dipper hunt, I decided to go in one more time that month and sure enough I found a Dipper’s nest a quarter mile upstream from the old nest and this time on the north side of the river. Some one must have been smiling upon me because if the nest had been built any further up river I would not have found it as this location as this is where the river canyon narrows and I can go no further upstream. The nest was complete with screaming babies and the parents used the same pattern of hunting; returning with food but first pit stopping below the nest in the shade and taking a rest before dropping off the welcome food. I doubt if these are the same parents as that old nest I found was over ten years ago, but they had developed the same habits for feeding that their ancestors had. Photographing birds is not in anyway easy. Photographing birds in the wild in a nest over a freezing river is even tougher. In order to get close to the nest, I had to wait until the river receded and wear clothing matching my surroundings so as not to startle them. Fortunately for me, these little bluish grey birds are very secure where they put their nest that they seem not to mind if I get about twenty-five from them. So I was able to get pretty close and capture some nice shots of them below the nest on their favorite ‘pit-stop’ rock and on other landing rocks along and in the river. The water was still way to fast, deep and cold for me to actually get a shot of the nest which I think is so far inside the rock face that it is hidden from view anyway, but I will continue with my quest for the perfect Dipper photo in the summer months.
Posted by Putah Creek Photo at 12:34 PM